May it please Your Excellency,
I am a practicing Advocate in the Madras High Court (South India) with 25 years of bar experience. I am a lay member of Roman Catholic Church.
1. Your Excellency told the “Interactive Dialogue on Harmony with Nature” on April 22, 2013 at UNHQ, New York to mark “International Mother Earth Day” as “to confront the hard truth that our planet is under threat, when we threaten the planet, we undermine our only home and our future survival. Today is a chance to reaffirm our collective responsibility to promote harmony with nature”
2. I am surprised to see, that your speech is quite indifferent, because today the world is going against nature in all respect. Today, everything is converted into money, publicity mania and towards sexual lust.
3. On November 9, 2012 Your Excellency told the General Assembly that “extreme weather due to climate change is the now normal… Our challenge remains, clear and urgent: to reduce greenhouse gas emissions, to strengthen adaptation to….even larger climate shocks…., and to reach a legally binding climate agreement by 2015… This should be one of the main lesions of Hurricane Sandy”. Again on November 13, 2012 you said at Yale that “the science is clear; we should waste no more time on that debate”. The following day you spoke on Al Gore’s “Dirty weather” webcast, that “more severe storms, harsher droughts, greater floods, in witnessing in October 2012, Hurricane sandy struck the Eastern Seaboard of the United States. A nation saw the reality of climate change. The recovery will cost tens of billions of dollars”. On the other hand 134 scientists from all over the world sent a letter dated November 29, 2012 to Your Excellency that “current scientific knowledge does not substantiate Your Excellency’s assertions and there is no sound reason for the costly, restrictive public policy decisions proposed at the UN climate conference in Qatar. Rigorous analysis of unbiased observational data does not support the projections of future global warming predicated by computer models now proven to exaggerate warming and its effects”.
4. As per the above statement, it is not the climate change but the nature is furious. It is quite often happened in the past. For example, earth quake in Shansi, China in January 23, 1556, wherein 830,000 people were killed and in Calcutta (India) 300,000 people died in October 11, 1737 due to earth quake. And the Tsunami generated waves as high as 8 meter in Ehima Prefecture and Oita Prefecture in Japan on November 7, 1854 wherein the total death was 80,000 to 100,000 and etc. In the above said examples, there is no man made green house gas emissions at that time. Therefore, hurricane, tsunami and earth quake these are all occurred by the nature’s fury and not as per ‘Al Gore’s Dirty weather webcast’.
5. An article in “The Guardian (UK)” published in August 10, 2008 reported that the Professor Wieslaw Maslowski of the Naval Postgraduate School in Monterey California and his team produced a forecast under heading ‘Meltdown in the Arctic is speeding up’ that “Ice at the North Pole melted at an unprecedented rate last week, with leading scientists warning that the Arctic could be ice-free in summer by 2013”. Your Excellency, now we are in 2013. Nothing happened, the Arctic is the same and the world is the same. Therefore, everybody is making use of anything to publicize their name in top, for money or for cheap popularity.

8.   His Excellency the President of the European Council,
1049, Brussels,
Belgium.
E-mail : koen.doens@ec.europa.eu 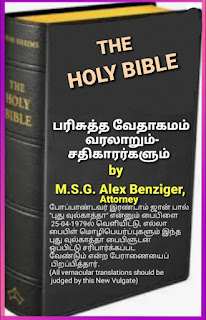 THE HOLY BIBLE WAS TRANSLATED INTO “TAMIL LANGUAGE IN 1995” BY THE CATHOLIC BISHOPS OF TAMILNADU(SOUTH INDIA) IS TOTALLY CONTRADICTORY TO THE DECREE “ SCRIPTURARUM THESAURUS” ISSUED BY HIS HOLINESS POPE JOHN PAUL II DATED APRIL 25, 1979. THE TRANSLATED BIBLE IS KNOWN AS ‘ THIRUVIVILIAM”, IT IS DEVIATED FROM THE ORIGINAL BIBLE, DILUTED THE TRUTH AND DISTORTED THE FACTS. HOLY SEE HAVE BLIND EYE ON ALL THESE ERRONEOUS TRANSLATIONS.

MASS IN TAMIL IN CATHOLIC CHURCHES ARE INVALID : CHENNAI COURT

CATHOLIC PRIESTS TO BREAK THE SEAL OF CONFESSION IS CONTRARY TO THE SCRIPTURES, TRADITION AND WILL OF GOD AND HENCE NO ONE HAS THE POWER OR RIGHT TO CHANGE OR ALTER OR MODIFY.

WHETHER THE CASTE SYSTEM IS NECESSARY IN THIS MODERN DIGITAL WORLD?

TRANSGENDER IS NOT THIRD GENDER

THE REQUEST OF THE UN COMMITTEE TO CHANGE THE TEACHING OF THE CATHOLIC CHURCH IS CONTRARY TO THE SCRIPTURES, TRADITION AND WILL OF GOD